Reflections on Creativity and Culture Collision 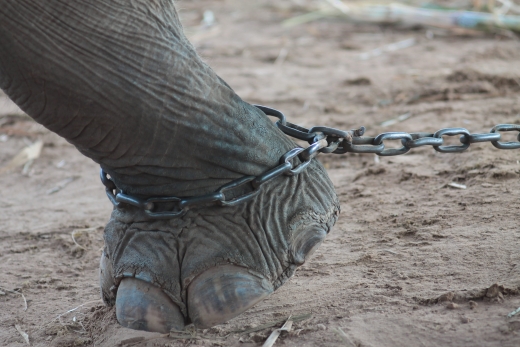 We’ve all been to the zoo. Some zoos do better than others at recreating natural habitats, so the animals they confine can enjoy the illusion of freedom.

Visiting one such zoo, I studied a female elephant in her enclosure. The elephant’s behavior puzzled me. She would step forward onto a horizontal log, and it looked like she was about to cross over it. Then her rear leg would lift and bend slightly. As if this slight movement had tugged a rope, she would stop, then step backward off the log. Once back on all fours, she would move forward and repeat the motion. Step on, lift leg, jerk, step back. Step on, lift leg, jerk, step back. Over and over.

I watched her a while before noticing a woman in a zoo uniform picking up trash. “Excuse me,” I said, “do you know why this elephant does this?”

The zoo lady shrugged. “She does that all day long. Back and forth, all day. They told me she used to have a big ball and chain on her leg. Round her ankle like that.” She made a clasping motion with her hands. “Guess she thinks it’s still there. She does that all day, like she doesn’t know what she’s doing.”

The zoo lady returned to her work, leaving me to watch the elephant.

It would be so easy for her to step over the log. She was among the most powerful animals on earth. Her muscles were strong. But her brain was stronger.

In business, we often bring creative people on to our teams. We look for folks who will “think outside the box.” We want fresh ideas. Up to a point.

We often struggle in business with confronting the unconventional. Unconventional methods rattle that place I call the Certainty Box (1), which is where managers live, where the measures are sure, identified and agreed upon, where performance is measured according to adherence to rules, regulations, and best practices.

Much of our lives are lived in Certainty Boxes -- even when we’re being creative.

When we attract creative people to our teams, we’re often not prepared for the creativity they exercise. The famous Apple commercial notwithstanding (2), we generally tolerate creativity when it stays within our guardrails. Creativity works best within the Certainty Box we’ve established. (3)

In business, we have generally accepted ways of doing things. We often call this “culture,” though it can just as easily be found in theories and best practices, codified into our business education systems: Take risks; don’t take risks. Make data-driven solutions. Measure outputs or results against inputs or investments. Tolerate mistakes; don’t tolerate mistakes. Reward courage and risk-taking; reward performance to standards.

What happens when something new comes along?

There is a mind and culture shift accompanying Agile, with its emphasis on roadmaps, incremental delivery, daily standups, iterations, retrospectives and all the rest. We focus on teams, letting teams have a say in how work is broken down, described via stories and delivered.

Today, we likely are installing Agile in a swirl of crosscurrents and conflicting priorities known as How We Are Presently Doing Things. Agile will fix all that. After all, we have examples in the industry to guide us. New best practices. Darling companies.

Agile will let us climb out of our old Certainty Box, enabling us to self-direct our work, thereby giving our customers what they value quickly, boldly and smoothly. (5)

But think. Agile has its own disciplines, its own language, its own culture, its own measures of success, its own adherents and critics and everything in between. In large organizations, I can foresee an office of experts (we used to call them change agents, facilitators, coaches) whose role is to guide the great unwashed from what they then had been doing to what they now will be doing. Experts whose role will also include, I might add, correcting behaviors not in line with the Agile way and discarding or discounting measures that aren’t aligned with the Product Driven Organization’s measures of success.

Experts whose role, ultimately, is to define the new Certainty Box, the measures that go into it, the behaviors consistent with it, and the behaviors that belong outside (and whose bearers are therefore ostracized).

Another Certainty Box, by the way, despite the artistry. People were certified in this, and – crucially – rewarded for their expertise. For their ability (here, same as Agile) for Getting Things Done.

When you impose new ways of doing business on old, you end up with a messy explosion, a culture collision. You end up with adherents who see the value in the new way fighting those who don’t see why proven methods must change. Aspiration and perhaps anticipated reward and recognition, colliding with recognized achievement and past reward.

Now return to that unchained elephant. Better yet, go back to the time in her life when she was truly unrestrained, when the chain hadn’t yet been fastened to her leg. What had her life been like then? Free, dangerous, or both?

The people trying to do new things, like elephants not yet chained, could well wreck the place. Schedules could go to hell. Timetables could be blown. Those in charge, likely having risen there through a reward structure based on what had worked before, find themselves challenged now to change, to adopt a new way, and subtly threatened if they don’t (7). They may bemoan and find (with good reason) that the new way looks uncontrolled, chaotic, that it will never work.

What good is a product, they will say, if it’s not delivered on time and within budget?

The journey to replace one delivery culture with another is a tortuous one.

An instinct for the folks steeped in the former culture is to double down. To find people – and there will be plenty – who are accustomed to the traditional way to work, and who can impose their wills upon those who are trying to do things the new way. These allies will impose the tried and true on those who were attempting to follow what senior leaders had signaled was the new way to go. The temptation to punish can be great. It will be masked in language of non-performance, of failure to deliver. Anticipated reward meets unexpected retribution.

When we insist upon things being done a certain way, for whatever reason (good or politically convenient), we risk placing a chain on the back leg of the elephant. When we curtail or even punish creativity because we find it strange and inconvenient, we turn the lock in the chain’s key. Leave that chain there long enough, or punish the elephant for stepping over the log, and the elephant learns not to step over the log. Ever again.

Too many careers have taken wing on the fresh air currents of a new way of doing business, only to get hit with old-school turbulence. Careers have been torpedoed for embracing change too soon to suit those in middle management – never mind what senior leaders are saying. (8) Once those careers are damaged, the people whose wings have been painfully shorn think twice or thrice before embracing change again.

To be truly creative is to be both courageous and confident – courageous enough to journey to the end of your thought, and confident enough to realize the value of the journey and the achievement at its end. Confidence helps withstand challenges.

But when those challenges come from people who hold the keys to your advancement, and those people tear you down for not listening, for being rebellious, that’s tough. You can question who’s rebelling – you, because you’re trying to do things the new way; or them, because they’ve been rewarded for different behaviors in the past and are rebelling against what’s coming their way. Who has more invested in this game? Which elephant is chained, and which elephant is about to be?

For leaders, the result can well be a new chained elephant. Someone who was trying to be creative. Someone who was working hard to discover new ways to attack old problems. Someone who then pays the price with a bad performance review, a shock to his or her beliefs, with counseling whose language masks attacks on his or her character or integrity. We ask a lot of people if we ask them to risk this in the name of doing new things. Perhaps we ask too much.

Courage and confidence are easy to lose when this happens. Cuts delivered by the weapons immediate supervisors and managers wield – and they wield plenty and know how to use them – may well create deep wounds unlikely to heal soon. So shaken, some will agree to have the chains put on. Others will leave. But even if they leave, they may think long and hard before exercising creativity or taking risks again. They become unchained elephants.

That great untapped resource – unchained elephants unwilling to step over the log – is, in my opinion, a massive hidden tragedy in business. It sacrifices innovation for at best safe tinkering. It stifles progress. It sustains the inertia that arises when past performance measures dictate present behavior. It holds everybody down, and nobody wins.

Consider this. The market – people, customers – won’t care whether you used Agile, Project Management, Time-to-Market, or an organized set of chimpanzees at typewriters to fashion the product they crave. (10) Your customers – and your potential customers – will judge success as a product or service that provides what they want, when they want, reliably and flexibly.

Finding a way to harness creativity, to reward people for trying new things while still recognizing the wisdom of those who achieved impressive prior results, is one of the many balancing acts of leadership. Diplomacy, humility, and sensitivity to the collective aspirations of your workforce are hallmarks of what great leaders achieve, so that, in the words of Lau Tzu, “A great leader is one of whom the people say, We did it ourselves.” (11)

(1) I’ll be doing a lot more with the Certainty Box soon. Certainty Boxes are both necessary to provide order and structure and limiting when it comes to creativity and leadership. Not a new concept, by any means – and probably not really a new name, either.

(2) You remember. Give me the rebels, etc. Go here if you must. Steve Jobs was not one whose opinions would be lightly crossed. So how rebellious could you be, really? (OK, OK, I’m already apologizing…)

(3) Sometimes we recognize Certainty Box guardrails, and sometimes we don’t. For example, is GDP a guardrail? What happens when we measure outside it? What about the scientific method? Is that a generally accepted (some would say “proven”) way of going about things, or is it a guardrail?

(4) This should evoke that well-known phrase, “a bull in a china shop.” In this case, an elephant.

(5) Sorry to spoil the fun, but we don’t “give” our customers anything. We sell it. And, by the way, if they don’t want and value what we’re creating, we may develop it anyway and let them know that this is what they really did want. Leading the horse to water but also making it drink, and all that.

(6) A quote to ponder, from Lawrence Sterne: “Sciences may be learned by rote, but wisdom not.”

(7) Or not so subtly. The workplace is littered with old-school managers who needed to be “made an example of.” A taking to the woodshed in the name of progress. Or, in some cases, shown the door. Where do they go? What becomes of them?

(8) There’s more here, which I treat in The Broken Triangle – but even that exploration, long as it is, falls short of the mark.

(9) There’s an oxymoron – telling someone you permit them to be free. What’s “empowering” about that? You’re still the one telling them how to behave. It’s environment and leadership that count here, far more than words.

(10) A lot more could be said here, about ethics, ends justifying means, cutting corners and so forth.